deja vous all over again

april 30th at zenith bar in angel, londres, catch us with Anorak, all the way from amiens as they close out their european tour. if you like yr botch/converge you'll be down with these lads and no mistake. with the jaw-dropping Nitkowski closing out the night, this one is set to be a bit of a belter. 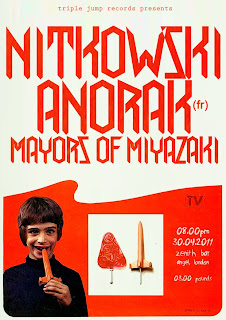 down with the sickness

claire has come down with some nasty fever so we unfortunately have to pull out of IHTK this evening. bizarrely, the last time they booked us we cancelled at the last minute due to chris getting a swollen drum gland too.

big apologies to wayne and alex at IHTK. i going to buy them a crapload of beers tonite. we have a few london shows in april. last night we played the old blue last with bullet proof vest and great western. both a good laugh and top lads. plus one of the guitarists from great western looked like the young peter pan from hook. bonus! apparently for our first 3 songs my vocals made me sound like i was in a cavernous cathedral made out of iron, but after the sound lad sorted that out it was all pretty rad.

we're really looking forward to i hate the kids and the victory in dalston on [edit] friday. yokozuna and cutthroat convention are firm faves. don't miss 'em! fat bicth are from brighton, i don't know of them personally, but i do know that IHTK wouldn't book anyone less than awesome, so they should be ace.

the nitkowski show at the end of the month should also be beffin. top french lads anorak will be making their debut appearance in london for that'un. the doods are NAILS if you don't know em. i heard they might be playing hellfest this year with the likes of clutch, the melvins, kyuss lives and electric wizard. the bastards.