we're proud to announce that we've been asked to play Malcfest 2011 on the first weekend of september. Malcfest is a proper DIY music and art festival, this year will be the biggest yet, with around 40 bands playing over 4 days somewhere near charing in kent. more details when we have them.

in other news, we'll be getting some t-shirts screen-printed shortly! quite excited about that. they'll cost yer about a fiver we reckon. they'll be available from our shop and at shows when they're done.
Posted by Gareth at 01:25 No comments: 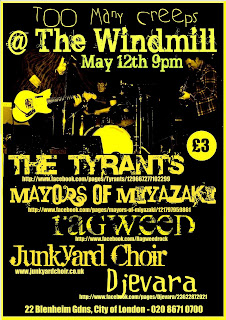 why do they call it a cheese grater when it makes cheese smaller?

we had banger of an evening last night, Anorak totally slayed, i don't think anyone has ever seen Ed'kowski with a smile across his face for that long. they liked my cooking too, which besides the show was my my main concern. i find cooking for french people slightly nerve-racking, given their reputation as legendary foodies. the food i've been fed in France and such with Silent Front has always been impeccable.
Nitkowski were obviously brutally awesome too, but you already knew that. lovely lads.
we don't have any shows booked now till july now. we're going to concentrate on getting enough material together for our next album in the interim (though that's not to say that we won't take bookings if they come our way of course!). Tom returns in late july, but before we bid farewell to Chris, we'll be sure to have suitabley rad send-off show. we might even try something with two drummers if we're feeling saucy.
wick.
x
Posted by Gareth at 07:30 No comments: